Issue: An anonymous anti-TM web site claims that crime has increased in Fairfield Iowa, the home of Maharishi University of Management.

Fairfield is one of the safest towns in the USA. The web site alleges that Fairfield is place with a lot of crime. On the contrary, a comparison of the violent crime rate in Fairfield from 1991-1998 (the period addressed by the web site) shows that Fairfield’s crime rate was 34% lower than other comparable small U.S. towns under 10,000 population. Moreover, the rate of violent crime in Fairfield is dramatically less than larger U.S. cities-- 38% to 85% less. In fact, before 1974 when Maharishi University of Management was established in Fairfield, Fairfield’s rate of violent crime was similar to the mean of small U.S. towns under 10,000. However, in the 30 years from 1975 to 2005 since M.U.M has been in Fairfield, the city’s violent crime rate has been lower than the mean of other small towns 90% of the time, indicating a consistent record of being one of the safest cities in America. 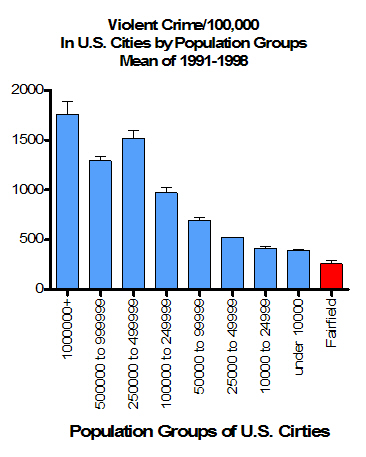 The error bars are standard errors of the mean for the year to year variation in crime.

Here is the data presented on the web site.*

Here is graph of the same data. It does not show an “overall crime increase for the period”, as the website proclaims. Instead, it shows a basically flat crime rate trend from 1991 to 1998. Formal regression analysis supports this perception. If anything there is a negative slope of decreasing crime (beta = -.40) from 1991 to 1998. This, however, is not statistically significant (F1,6 = 1.18, p < .32), and the non-significant slope just indicates that the crime trend over the period is essentially flat, showing that there was not an increase in crime in Jefferson County in the 1990s. 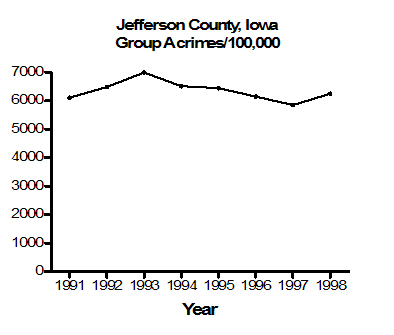 The “evidence” for “increasing crime rate” presented by the web site is completely misleading. The web site says that the average crime rate from 1991-1998 (6347.1) was higher than the rate in 1991 (6103.5). While this is true, the most relevant thing is the crime trend, that is, how the crime rate is moving. It can be seen from the graph above and from the regression analysis that there was not an increase in crime trend. But even if one were to interpret this data as a crime increase after 1991, the fact remains that Fairfield has a very low rate of violent crime, consistent with the Maharishi Effect.