Chronic stress may cause blood pressure to be sustained at too high a level and cause enlargement of the left ventricle, the chambers in the heart responsible for pumping blood to the body. This enlargement of the heart, called left ventricular hypertrophy, is a strong predictor of cardiovascular disease. This study on 49 adolescents found significant decreases in Left Ventricular Mass (LVM, p < .04) over an eight-month period in the TM group compared to the health-education control (CTL) group. This study and the one on weight control are further analyses of a previously published randomized controlled trial (Barnes VA, Johnson MH, Treiber FA. Impact of Transcendental Meditation on ambulatory blood pressure in African American adolescents. American Journal Hypertension. 2004;17(4):366-369.) 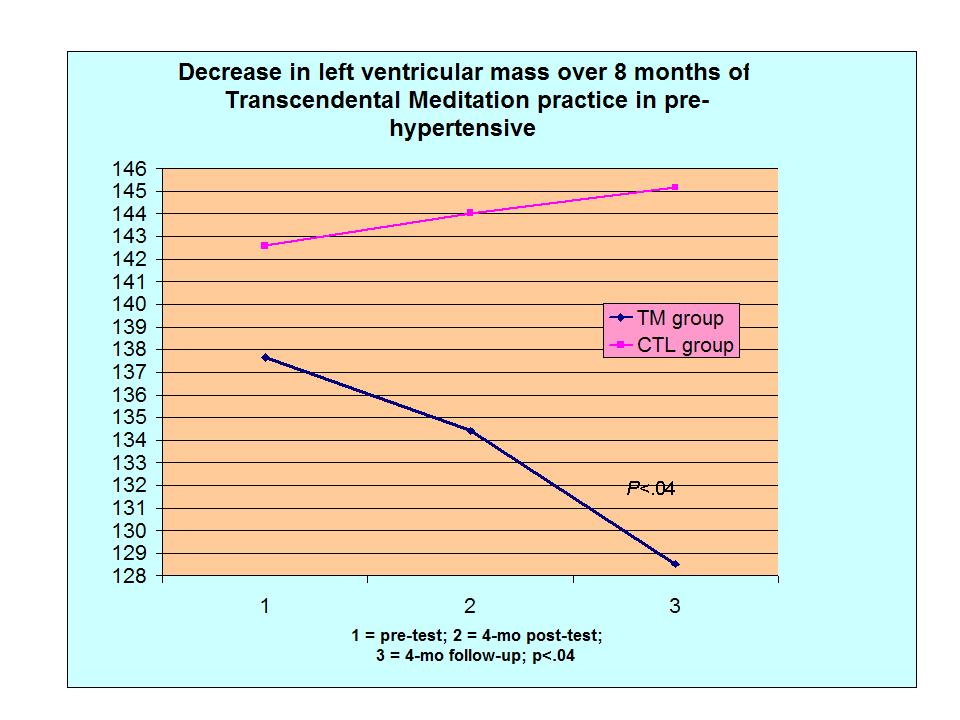 Background: The recurrent and/or sustained exaggerated increases in blood pressure responses to stress are associated with concomitant increases in cardiac and vascular wall tension.  It is hypothesized that over time this leads to secondary cardiovascular structural adaptation, that is, vascular and ventricular remodeling to help normalize wall tension.  An early sign of ventricular remodeling is increased left ventricular mass (LVM) which over time may lead to left ventricular hypertrophy, the strongest predictor of cardiovascular morbidity and mortality, other than advancing age.

Conclusion: These preliminary findings, which require cross validation, indicated significant decreases in LVM and LVMI in the TM group compared to CTL.  These findings indicate significant improvements in measures of ventricular structure and function (i.e., decreased LVMI) in African American adolescents at risk for essential hypertension.