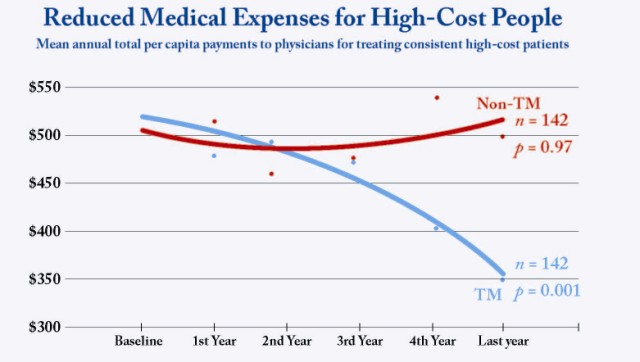 Over five years, the TM group’s physician expenses decreased by 28%.

The above trend lines show the general behavior of the physician fees for the two
groups from the pre-intervention Baseline year through the 5 years after the TM practice began. All dollar values were adjusted for inflation and were expressed in constant 1992 Canadian dollars. P-values show the significance of the comparison of Baseline and Last Year for each group. Source: Herron, R. E. Changes in Physician Costs Among High Cost Transcendental Meditation Practitioners Compared with High Cost Nonpractitioners Over 5 Years, American Journal of Health Promotion, 2011; 26(1): 56–60.

Purpose. To determine whether the Transcendental Meditation (TM) technique can affect the physician costs of consistently high-cost people.

Participants. The highest-spending 10% of 1418 Quebec health insurance enrollees who practiced the TM technique were compared with the highest 10% of 1418 subjects who were randomly selected from enrollees of the same age, sex, and region. TM participants had chosen to begin the technique prior to choosing to enter the study.

Measures. Annual payments to private physicians in all treatment settings. The Quebec government health insurance agency provided the total physician payments for each of the 2836 subjects from 1981 to 1994. Other medical expense data for individuals were unavailable. Data were adjusted for medical cost inflation.

Analysis. For each subject, least-squares regression slopes were calculated to estimate preintervention and postintervention annual rates of change in payments. The groups’ means, slopes, and medians were compared using both parametric and nonparametric tests.

Results. Before starting meditation, the yearly rate of increase in payments to physicians between groups was not significantly different. After commencing meditation, the TM group’s mean payments declined $44.93 annually (p < .004), whereas the NT comparison group’s payments exhibited nonsignificant changes. After 1 year, the TM group decreased 11%, and after 5 years their cumulative reduction was 28% (p < .001).

Conclusions. The results suggest the intervention may be an effective method for reducing physician costs. Randomized studies are recommended.